I got some southern slang via text today. “Hottern hell”. Speaks for itself.

Up early to move on out – cruising speed of around 10mph. I’ve got 30 miles in before 10am. Feels good, only the standard issue day 2 sorenesses. I pass some pelicans and a fantastic uncredited quote about greatness and simplicity. I forget the quote but it did however set the scene for a day of quotables. And it nailed the shit out of what it is that I get the most out of these rides: this state of everything coming in “great” and “simple” — at the frequency of 24/7!

Rolling along, I decide to spend the afternoon in Baton Rouge, for which I almost get murked (you can read Suburbakillyah for the long version.) But I make it to the French Truck Coffee shop and all is well. Cold brew on the slow drip with some candied maple bacon goat cheese toast with a side of avocado toast. Solid WiFi, bathrooms and bike parking.

The interwebs speak of the Robert Bogan Fire Museum sponsored by the Baton Rouge Council is the Arts, so I head all the way downtown along some sharrows. Great collection of BRFD history there – though I think the art dealers set up for a Saturday market were irked that I am there for the fire history and not to to buy random canvas paintings. 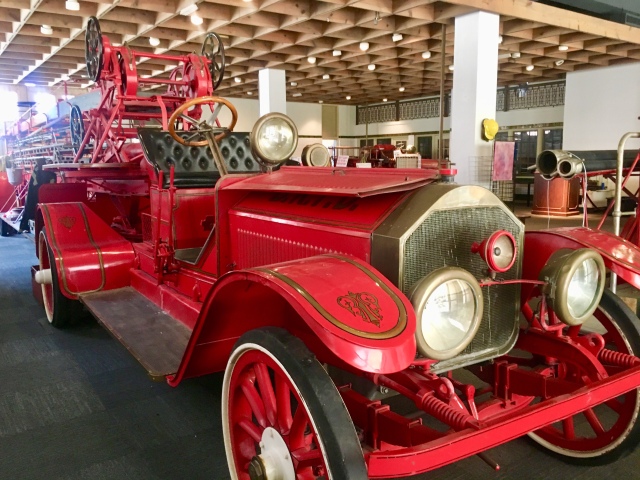 Vehicular traffic is incredibly light, so I cruise around, checking back in on the Mississippi River, circling the state capital, and then napping under a tree at the top of veterans park. Yes little boy, that is my bike between two big ass cannons. Why do you ask?

After that cute little germ factory came up the hill all excited and shit just to wake me up, I decide I don’t wanna wait out the heat anymore and head out for another 25 miles or so up “Scenic Highway”. Oddly, the first 6 or 7 miles is nothing but Exxon Mobil refineries.

After that it gets pretty awesome though. The entire next few miles give me a very Detroit or Buffalo vibe, and there is mural after mural depicting various African American historical figures or moments. I enjoy one from MLK with a great quote: “the time is always right to do the right thing”, followed closely by this mural depicting an Asante Adinkra around a corner and then the great H. Rap Brown over an American flag around the other. Both are very powerful images but many don’t know their significance, so I am happy to see knowledge being passed along in this timeless manner. (And also the “we can b4 columbus.”)

Made it to my prearranged stop, a fantastic compound of a place owned and tended to by Perry and Lep. These two fine people are really sort of famous in the bike touring crowd for their generosity and hospitality. Perry immediately lets me know I would probably be the last of the season, we talk about everything from warm showers to shitty tenants to Airbnb. And of course we need out on bike stuff and camping gear. (I may need a “rollover” internally geared hub soon!). I am certainly not spared their widely known generosity and hospitality – a feast of an organic dinner is served and the beans and quinoa were spicy! It is fantastic. They even have an outdoor hot water shower! I offer to return the favor anytime back in Buffalo, and I do hope they take me up on that offer.

Next up I begin the most excited part: 400 continuous miles of national parkway up the Natchez trace. Few people, few services, lots of awesome.