Picture this: Theodore Roosevelt travels through time on a Fat Tire Bicycle and brings Frederick Law Olmsted and Fred Hampton to the present day and together they make America a better place by cutting the President’s, Congress’, and the Supreme Court’s salaries by 70% – all as a means to finance completing and maintaining a system of National Parkways; connecting our broad ass motherfucking nation’s communities in truly meaningful ways. Maybe call it a “trail of traces” or “trace of trails”? Whichever Ted and Fred and Fred prefer at this point in the book and then poorly adapted film. What’s the sequel gonna be about anyway? Maybe we can get George Washington, Bruce Lee and Lisa Left Eye Lopes to buddy cop it up on a mission to fix schools and hospitals and bridges! 😂

I’m now at Rocky Springs campground. Someone left a hot coal amongst a pile of trash they barely burned off, so I’ll be “leaving it better than I found it” as I think I they now say. Still, Captain Caveman voice would be like, “Low smoky fire keep away gnats flies ticks.” Hell, it’s the only way I can be out with all these bugs and type this blog bloggy blog out. (If you’re keeping count at home, score one for 🔥). But all this is just the right now…

Traveling back in time to when I wake up in the seediest hotel room in Natchez Mississippi. The dog now clearly working reception is cute and attentive, but doesn’t seem to wanna take my key card back. A human finally shows – and I break the fuck out. Turns out the gas station next to the not-yet-open-only-bike-shop-in-town’s coffee is fantastic. No shit. I go with the BOLD variety over the ADDICT variety. Things look up as a I hit the bike shop, fingers crossed that I can get the repairs I need.

A couple hours later I’ve made some new friends and I’m rolling out of Trippe’s Western Auto with a new spoke and tube and in a few short miles, I’m On the Trace!. I’ve got a 60+ mile ride up through nothing but nature and history to a campground that may or may not have water – and it really doesn’t matter because this stretch is rare heavenly biking bliss in all it’s uni-corny glory. (SWIDT?). If I’m keeping count (and I am), there are 0 potholes and only 29* motor vehicles pass me today. In 60 miles. Something like one vehicle every eight to nine minutes! Nothing to stop and buy, and motorists are told via explicit signage to change lanes while passing me. I count 5 such signs. Sweet nature-bike-vana. I might need an extra wet nap shower with all the moistness.

A lone asshole in an RV (i call them lucky 13) beeps at me and only moves halfway over to pass – the only instance of anything like that all day. Still – even if it’s a friendly beep – why don’t you understand that I can hear your engine a quarter mile coming and I don’t need that? A bit of an asshole for sure, but no sepsis or diarrhea or anything too nasty – so I smile and wave at number thirteen as it speeds off, well over the 50 mph parkway limit.

Speaking of which, this is a National Park(way) right? Where are the Federales collecting the papeles on all that illegal rapido? Where’s America’s version of those loony loving Mounties, eh? Turns out (other than the road condition) all of this is severely underfunded. I can’t even determine how long it’s been in disrepair. Sites are closed, bathrooms are broken down, bulletin boards are shuddered. Some of it looks like its been since the 80s or 90s some looks like its been just the last couple years. 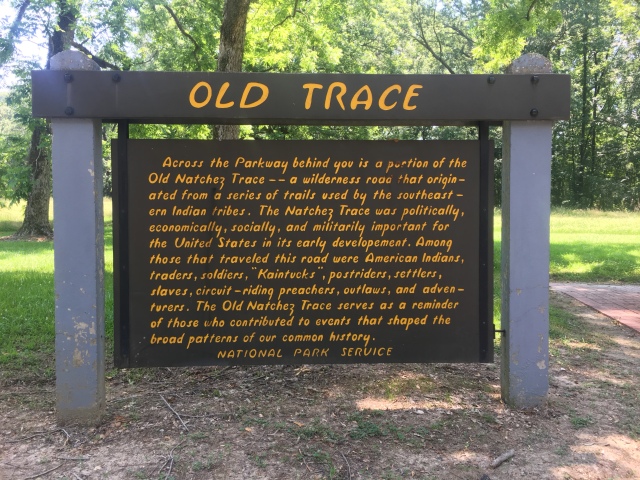 It’s me against the insect world of Mississippi as I look over a copy of the parkway map. I’ve got a long stretch of Mississippi and then Alabama and Tennessee ahead of me. I’d like to get off the Trace as little as possible and I’m thinking tomorrow in Jackson would be a good place to stock up on food. I meet Jay and his dad – they’re from North Carolina and are biking up the Trace as well. Awesome father and son activity if I do say so myself. We chat a bit and I’m pretty sure I’ll see more of them down the 440 something mile road. 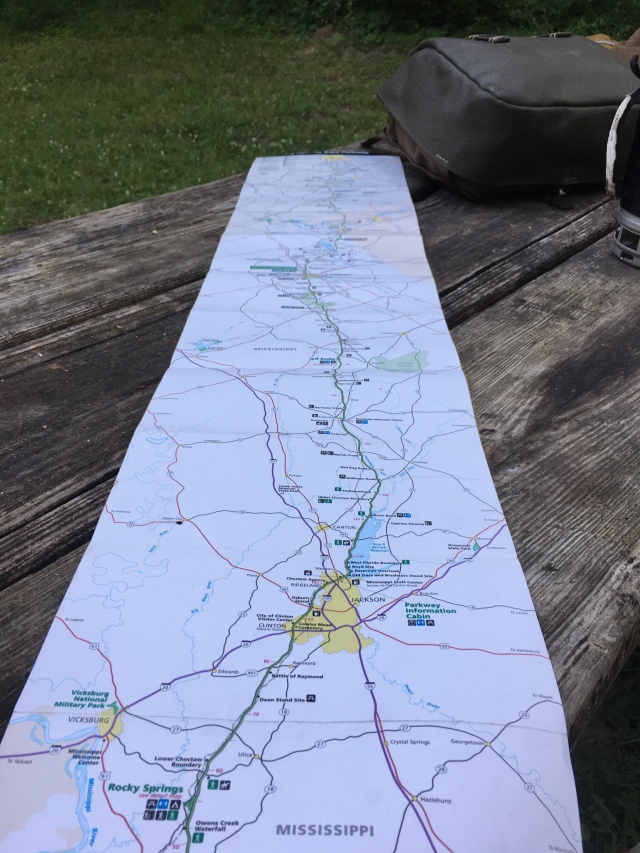 It finally cools off a bit so I’m no longer sweating all over myself naked in my tent. I take another wet wipe shower and put on cotton underwear. All I hear are wild animals calling to each about sex or something or other. Maybe my avocado on the table. No generator noise. No motor vehicle noise. The occasional overhead airplane is a cool version of white noise as I doze off under the stars.