Damn my brakes are squeaking…

When you’ve seen it manifest so many ways throughout rural areas, the natural “roadside stop-and-chill spot” becomes recognizable before you even get to it. Though not nearly as bad as the Suburbakillyah effect, every little buttfuck town USA comes with an increased load of vehicular traffic. I always feel it right as I pass the first country store or gas station, especially when there’s no shoulder. But there’s also the change up when you’re heading out, where the cars and trucks diverge or there’s a right turn over a bridge or there’s some tracks to cross going left at a fork. Sometimes its all three of those things at the same time. I see it coming today, like some sort of infrared vision fueled by being dog tired of riding the god forsaken hills of Kentucky. And so that’s where I’m stopped right now.

Go back in time to me waking up in the Winner’s Circle motel, shitting three times (¡aye dios mio!), showering once, eating half of a protein bar, filling my water bottles with free ice and my thermos with free coffee before peaceing the fuck out of prize-horse-land. I forget to brush my teeth.

My mighty heavy load is of Cymande proportions at this point and though I’d rather take it easy the first ten miles, the hills have me using all my gears in 2 miles. I cruise up and down, up and down – I get 25 miles in before breakfast number two: trail mix.

The motorists today are really nice until a couple bad apples come along. I wonder who is the bigger gaping prison-raped asshole? The motorcycle gang dweeb who brushes just inches by me after the two cars in front of him move completely into the other lane to pass? Or maybe the cunt with the six tire pickup truck who passes me all vroom vroomy, slows until I’m closer, then literally squeals his tires so I can taste burning rubber and exhaust? Or possibly the jerk in the two door sedan with something about god loving everyone stickered on his trunk who tries the same stunt but doesn’t realize she’s not very original? I don’t come up the answer. If you have any deep insights into this puzzling question, I’d kindly request you to type it up, email it to yourself, print that out on recycled paper, put it in a glass bottle and bury that bottle in the ground.

My legs are melting when I get startled by a sound I haven’t heard yet this trip: a train horn. Yes ladies and gentlemen, unlike civil discourse, trains are back. Not just train tracks (which I ain’t seen much of either), but actual trains regularly running on train tracks. Kentucky may not have much teeth, but they got much trains (if you’re playing along at home, scratch and sniff the train icon now). All of this can only mean one thing – lots of things are about to change around here.

First: It gets loud. I can no longer hear the car traffic cruise up behind me nor Stevie Wonder wondering if I knew “we’d be jammin’ to the break of dawn.” Two: the world is now my art gallery. Fantastic murals speed along at a distractingly furious pace. And C: the terrain is about to go less than 5% grade. Most of the train lines run parallel to my route but some cross. I get caught at a crossing for 20 minutes, mesmerized by the entire ordeal. Placard by placard. Graffiti piece by piece.

Ok, so we’re now all caught back up to that roadside “stop and chill spot” I described at the top. Good thing you’ve seen enough Tarantino films to follow along with this kinda thing huh?

My entire world flattens out after I have a snack in Williamstown. I don’t mean old ladies complaining about the bridges in Buffalo kinda flat, but the no more wear-your-knees-out, consecutive uphills kinda flat. No more granny gear. No more slow slaloms. I get it in from that point on. I’m right at 18-20 mph for a vast majority of miles 35 to 60, save a couple climbs here and there. I can smell the Ohio River coming. I’m now one gangster ass flat-earther.

I’m spending the night just minutes from the bridge to Cincinnati. One last night in Kentucky. I’m given a place to crash and immense hospitality by David and Karen, a couple who have done quite a ton of bike touring, including going cross country southern tier on their touring tandem (I love those things; n+1). They are super adventurous and made some great jambalaya and corn bread for us to feast on. We share stories and laughs… and tomorrow, I’m hitting Ohio. 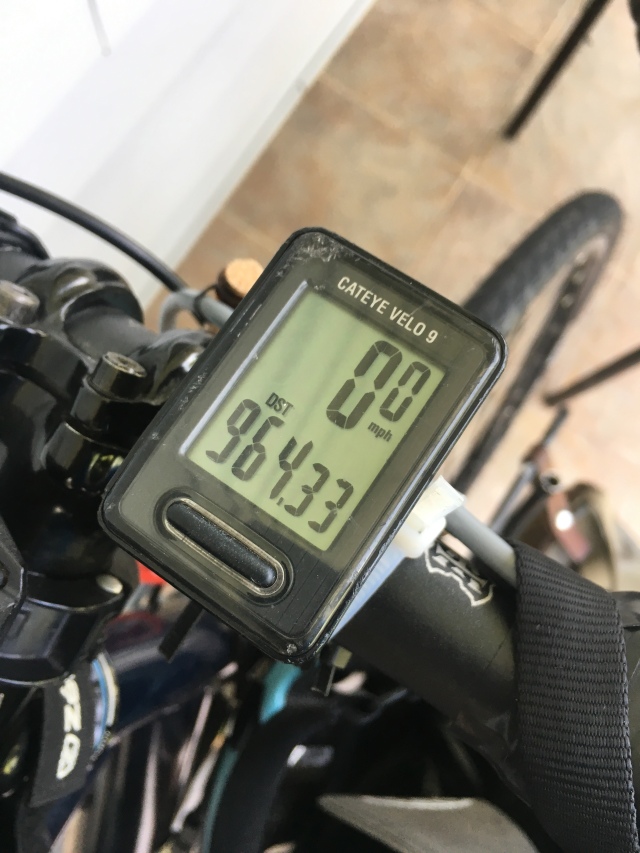