Hello boys and girls. Week 2’s initial mileage is brought to me by complete body inflammation. La palabra del hoy es butt hurts. No matter what language, this is the sorta thing that feels like I’m watching some raved-about old classic of a movie — but then don’t quite understand why this shit is supposed to be considered good — and now I just wanna turn it off… but I can’t, because “film”. Probably not the best metaphor, but I’m getting new pains here and there to go with the ones I had there and there and there. And course there. With no way out. Then a big ole’ dragonfly crosses a bridge with me at 14 mph and weaves around in rhythm to the Whatnauts. I forget all about my physical ailments and pick up the pace. If I had a GoPro and more consistent power outlets you’d thank me for that footage. But I don’t. So you won’t. Also, shout out to my good friend Count Bass D on the playlist, Instantly New and some of his earlier classics get me up a couple of those granny gear uphills today.

So it’s gonna be close, but I may run out of food before the end of the trace. I ate most of my peanut butter today with 2-3 days to go, but I really don’t want to get off this gorgeous parkway. Just the thought of dealing with traffic and road conditions keeps me from dipping off for a Gatorade at every small town. I’ll probably choose hunger over traffic when it comes to it. A simplified mode of living enabled by bike touring has always provided me with my most enjoyable experiences:

Riding the Trace has afforded me the opportunity to take that simplified mode of living a step further. We are all conditioned into different versions of the same “buy, consume, repeat” routine – it’s hard to notice it in ourselves sometimes. It’s ingrained in everything we do. We typically can’t even use a bathroom or drink water without paying for it. I’ll probably expand on it in a later post, but if you’re keeping score, I have not purchased a single thing for three days now. It’s setting a entirely new standard. Living the last few days off just what I have on me feels more like living than anything I have else ever felt.

A flat tire at the state line sets me back about 30 minutes. Shitty little metal wire got through the Kevlar reinforced tires and then the valve stem blew on my replacement. Got moving and got myself into Alabama. After a brief picnic table top nap near a creek, I push on another 15 miles and set up camp down at Colbert’s Ferry on the Tennessee River for what will be my first over night spent in this state which has no official state nickname (but has been referred to as the cotton state, the yellowhammer state and the heart of Dixie, so I can sorta see why). I’ve got a solid water supply and even scavenged a random power outlet, but damn all these wild Alabama animals like to get it on at night. Freaks.

PS. That food thing is real though, so if anyone wants to meet for a cheeseburger and an ale at the northern terminus of the Natchez Trace come Sunday afternoon/evening, I’ll pick up the check. 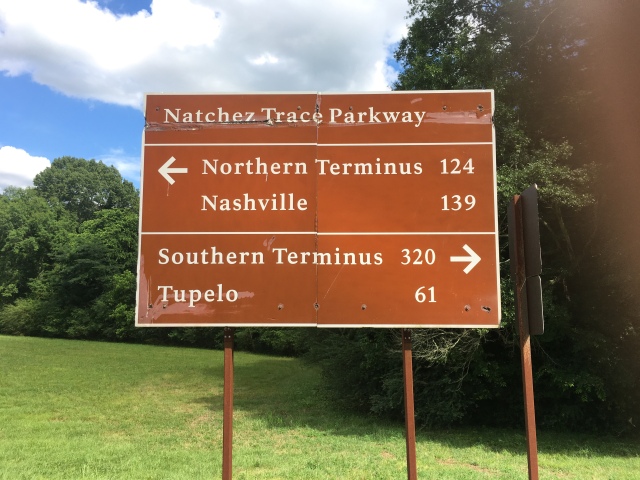