Takes me a little longer to get moving this morning, so I’m not packed up and moving out until just before 8am. I’m one lazy motherfucker come Saturday morning. 1 mile up I hit the John Coffee Memorial Bridge over the Tennessee River. Good name John, I’m glad they named this bridge after you, whoever the hell you are.

Then I hit the state line. In the words of Arrested Development, “Tennessee”. If you’re playing along at home, that’s state number 4. 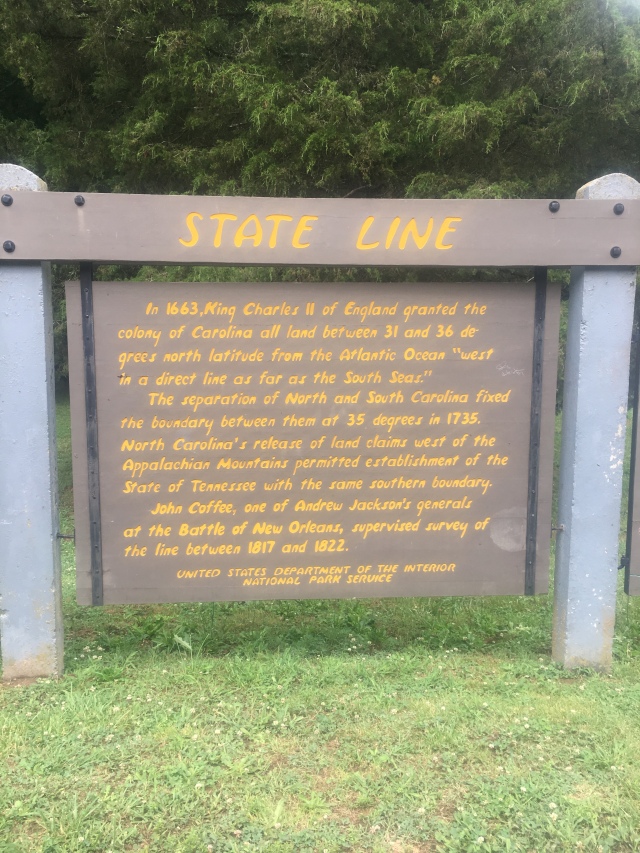 Today is all about dumb inclines, fun declines and in-between times. I stop at the Wayne Visitor Center. Fill up on water. Oooh, a free cookie. Sure. And peppermints? I never eat candy, I’ll take two. Thanks. Outside I find a power outlet and meet a guy named Tim. Clearly loaded down for long term off road biking (fat tires, tube bags, no panniers, etc), he is on a race from North Carolina to Oregon. And he looks lost, especially when my answer to “which way you headed” is simply, “north”. I’ll stick to roads with my skinny tires. Good luck Tim.

A couple dozen more miles up, I arrive at my intended daily terminus, the Meriwether Lewis campground. You know, Meriwether from the championship tag team exploring duo of “Lewis & Clarke. The dudes who never die of dissentery or cholera in Oregon Trail. They were definitely the Hall & Oates of their time. Well, good ol’ Meriwether died right here. And he’s buried right here. So even though, I respect the idea of an explorer being buried wherever he drops dead, this campground ain’t really working for me. I decide to use the last two hours of daylight and push another 23 miles to the last “bike-only” campsite before Nashville. Take that leg cramps!

What the fuck did I do? The biggest hill yet was laughing – just waiting for me to make this decision. Do you know what it’s like to pedal 3 mph for 38 minutes up a ridiculous grade to only have moved 1/4 mile toward your destination. I do. It sucks. You can’t do it you wanted to, it can only be thrust upon you like a grand piano falling on your head from 11 stories up. The whole time I wonder how many people have made it up with as much weight in tow and without stopping or walking, and which I will be. I remember words from the auto/bike shop owner Chris in Natchez: “rather we ridin’ slow than walkin’ fast”. It’s so absolutely true. I did deeper and never put my foot down. Thankfully, there’s no one waiting at the top with a medal for me. 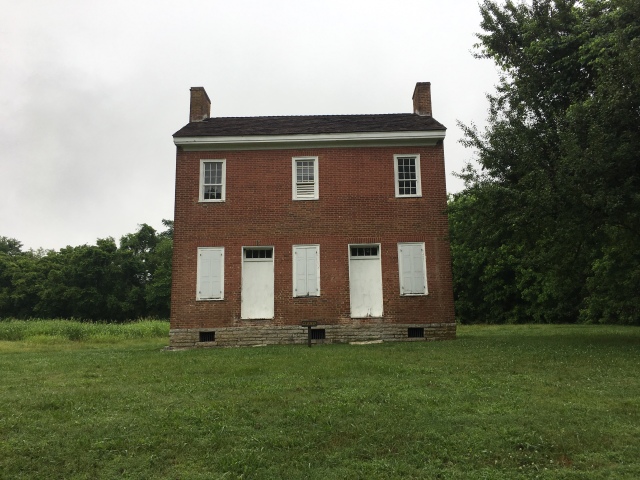 Arriving to the Gordon House restroom stop, I fill up on water and look at my map for info on the nearby bike campground. Turns out I have to exit the Trace for 1/4 mile and find the campground along the horse trail? Nope. Not gonna do it. Once again the sun is setting and I think I’ll just pop my tent up near the water supply and this here covered picnic table. Same as the last few nights. Makes for a much more enjoyable stay.

This time though, I’ve even got the company of Olga, a Ukrainian woman who says this bathroom stop is “her spot”. She apparently comes here for a couple hours on Saturday nights to exercise, listen to nature and meditate. She’s a very nice lady who used to volunteer as a yoga instructor in nearby criminal rehabilitation centers. We both eat our dinners (mmmm Ramen) and chat a bit about a variety of things, much of it not the run of the mill bullshit. And we do some of that word renowned National Park rest stop yoga. It’s about to go viral, so catch up and ditch the goats, hipsters. Olga shares some great stories of growing up in the Ukraine and not having very many luxuries – like a daily shower. Clearly this was her way of telling me something about my current scent, even though I took a dip in a spring and got poured on all day, I do indeed smell horrible. Olga also tells me an amazing story about how her grandmother and great-aunt not only weren’t split up – but survived a Nazi concentration camp together. She says they didn’t get split up because as her grandmother put it, “there were good Fritzes” (Fritz is German for soldier) The key to survival was apparently to not take showers because as it turns out those “showers” didn’t have water, just gas. Score one for me and knowing not to shower when cyborg Cheeto Jesus puts us all into Children of Men-style camps come 2031.

In all seriousness though, it was nice to have a deep and personal conversation with a complete totally random stranger. Bicycle travel brings out the humanity in humans. We get outside our bubble. We get comfortable being uncomfortable. We embrace strangers rather than fear them. Let’s go back to that state of being.