Yes. My butt cheeks are still sore. Probably at least for another day. Just in case you were wondering.

Today’s ride was short but sweet. Woke up, drank some coffee, made some oatmeal, drank more coffee. Went back to tent to warmup, ended up sleeping a couple more hours, probably because of the wimpy dogs howling throughout the night because of the “cold”. Felt good tho. Got back in the saddle, hit the grocery store then a straight shot down highway 1. Nice shoulder the whole way. No crocodile or alligator sightings though.

Key Largo is a strange place. And I’m trying like hell not to let that Beach Boys song get stuck in my head. After phone calls all told us there was no place to camp, we decided we would stealth for the night. Beforehand though, a trip to John Pennecamp State Park was in order. Glass bottom boat ride. Of course the entrance gate ranger told us that the boats were cancelled and there was still “no room to camp.” Shortly after we turned back a lady came running and screaming at me (yeah, that happens all the time). Turns out the guy at the gate was a volunteer who really didn’t know the job protocol (being a career firefighter, I’m leaving THAT ONE alone!) and she explained they try to accommodate cyclists. Yes! $20 later and we had a spot far and away from all of the RVs. This score was soon celebrated with steak and beer at the nearby Hobo’s Cafe. Another great day in the books. 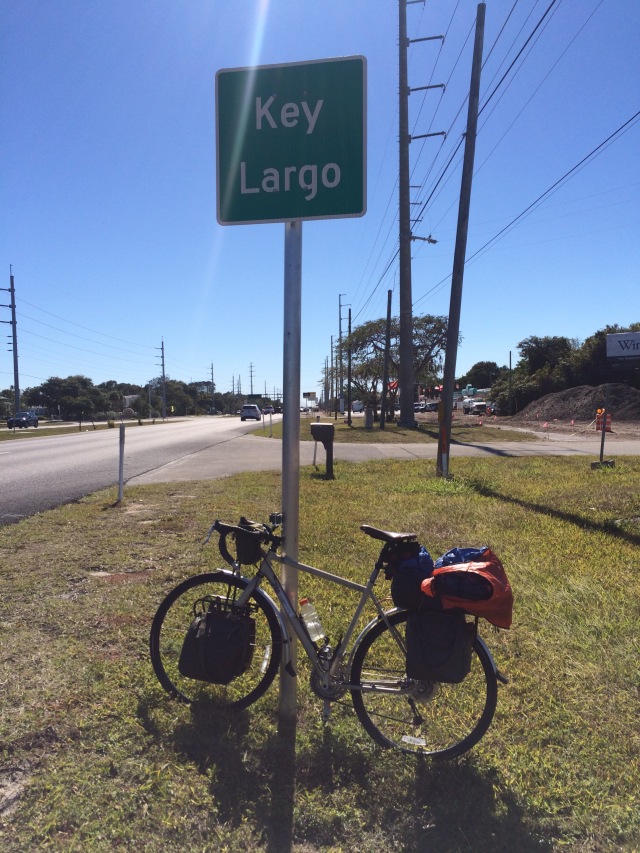